Cadence is a DJ, dancer, and clothing/swimwear designer and model in BeyondCP. She first appeared as a mascot at the Puffle Party, and a second time wearing the Pink Stripe Bikini she designed at the Water Party. Her third appearance was organizing and being a mascot at the Dance-a-thon. Her favorite phrase is, "It's time to dance!". She likes to call herself the "Dance Machine". She also owns a Purple Puffle named Lolz.

Like other mascots, she waddles around BeyondCP giving out a free background. She shows up in Dance Contest. When she asks what difficulty you want, you can click on her to get to expert mode. 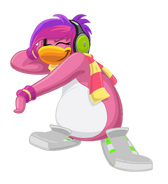 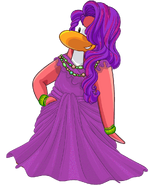 Cadence at formal events
Add a photo to this gallery 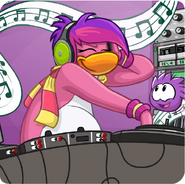 Cadence's Opening Playercard
Add a photo to this gallery 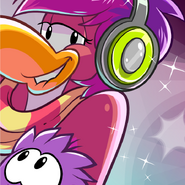 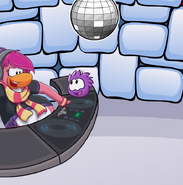 Cadence's Puffle Giveaway
Add a photo to this gallery
Retrieved from "https://beyondcp.fandom.com/wiki/Cadence?oldid=7464"
Community content is available under CC-BY-SA unless otherwise noted.