The Dojo is a room in BeyondCP. Sensei can always be found here, sitting on a green pillow. It is the home of the elements. Card-Jitsu can be played here.

The Dojo has been given a new graphical style. The elements are inscribed on the wall. The windows are fewer and farther between. The doors are correct with the outside.

The beta version of the Dojo, which was later scrapped, featured a two story version of the Dojo. There was an amulet on the top floor, and a ladder leading up to it. You could see parts of the sky in the background. This version has actually been featured in the official Club Penguin Magazine. 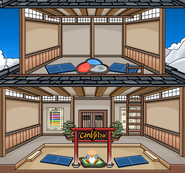 The scrapped design for the Dojo

Current Design of the Dojo
Add a photo to this gallery
Retrieved from "https://beyondcp.fandom.com/wiki/Dojo?oldid=5551"
Community content is available under CC-BY-SA unless otherwise noted.