Dot the Disguise Gal, or more commonly Dot, codenamed Agent D, is a female Elite Penguin Force agent who is a master of disguise. Her costumes make her unseen in many environments, fooling enemies such as Herbert P. Bear. She first appeared as a mascot at Operation: Break-in, and then appeared in a Purple Bikini at the Water Party, disguised as a penguin relaxing at the beach so she could see if Herbert was going to strike, which the EPF concluded that he might.

Dot's Purple Bikini she wore to track down Herbert in disguise at the Water Party has special protective metal built into the bikini top and bottom in case of attack by Herbert, and also has body temperature functions. These special modifications were implanted into the bikini by Gary the Gadget Guy, but the bikini itself was made by Cadence. Dot's bikini was called a "Battle Bikini" or "Metal Two-Piece", which makes Cadence and Gary crack up, but Dot embarrassed. This added to the fact that she hated wearing a two-piece swimsuit to go undercover, and that due to Gary's adjustments to the swimsuit, the bikini becomes a lot heavier, and tends to fall off Dot's body. This had happened to Dot a few times during the investigation, which caused Dot to become humiliated and hide in the water or behind a tree until she got the suit back on. She said "This is NOT my usual agent garment. In fact, much more revealing... a party like this is totally not the best time for Herbert to strike." Even after these events, Dot still wore the bikini to outings at the Beach or parties at the Swimming Pool because it was the only swimsuit she had, but she forced Gary to remove the technology inside the bikini. 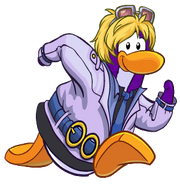 Dot's Running Appearance
Add a photo to this gallery 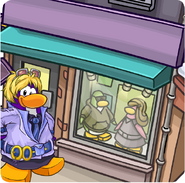 Dot's Opening Playercard
Add a photo to this gallery 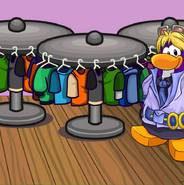 Dot's Opening Giveaway
Add a photo to this gallery
Retrieved from "https://beyondcp.fandom.com/wiki/Dot?oldid=7463"
Community content is available under CC-BY-SA unless otherwise noted.