Herbert Percival Bear Esquire is a villain mascot in BeyondCP. He is the main antagonist in the Elite Penguin Force storyline, and in Operation: Break-In. He is a large polar bear. His best friends and sidekick is Klutzy the Crab. He was planning on constructing a giant water balloon during the Water Party, to flood BeyondCP Island, which lead Dot the Disguise Gal to investigate by disguising in a Purple Bikini at the Water Party.

Herbert is known to be evil and sinister, and has great plans, but the Elite Penguin Force usually finds a way to thwart him and stop his plots. Even with the EPF stopping him every time, he hasn't given up... yet. He makes random appearances as a mascot in BeyondCP. Penguins are advised to throw snowballs at him if he is spotted. 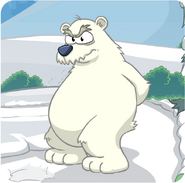 Herbert's Opening Playercard
Add a photo to this gallery 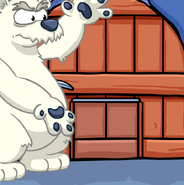 Herbert's Opening Giveaway
Add a photo to this gallery
Retrieved from "https://beyondcp.fandom.com/wiki/Herbert_P._Bear?oldid=7467"
Community content is available under CC-BY-SA unless otherwise noted.